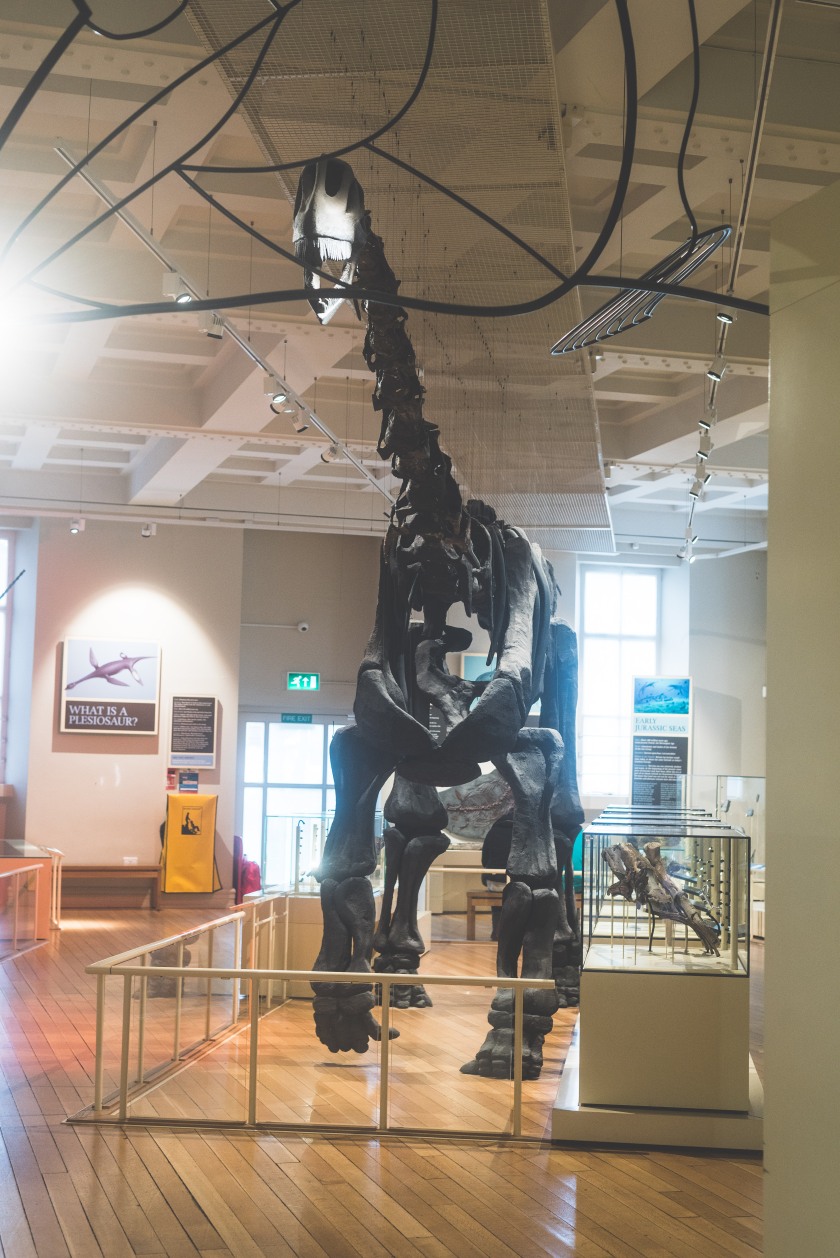 It was the 31st January and most of the UK had been turned into a winter wonderland. Not by snow, unfortunately, but by frost, ice and fog which covered every inch of the landscape. This included the East Midlands which is at the centre of this blog post. I’m from Nottingham; I was born here, I grew up here and I will be living here for the foreseeable future. I am not a patriot particularly (especially with the current state of this country *cough* Brexit is stupid *cough*) but I love my city.

For those who haven’t visited Nottingham, there is more to this city than Robin Hood – although you can visit the Major Oak in Sherwood Forest where he supposedly lived. It is a fairly small city, you can walk from one side to the other in about half an hour, and it is bustling with so many different types of people. I love it. There is something wonderful about Nottingham. It’s got a heap of character.

Nottinghamshire is a beautiful county. But then all of the counties in the East Midlands are beautiful. The countryside in Nottinghamshire, Derbyshire, Leicestershire, Lincolnshire, Rutland and Northamptonshire is honestly something to behold. I would definitely recommend visiting.

And this is where this story starts. The East Midlands. A place where I’ve lived my whole life and probably never really appreciated. As a dinosaur enthusiast, I’ve never considered the East Midlands to be particularly relevant. When you think of dinosaurs in Britain you tend to think of down south eg. the Isle of Wight, Lyme Regis etc. The closest Natural History Museum to me is in Nottingham (Wollaton Hall) but it is mainly taxidermied animals staring at you the whole way around. Something which I find extremely unnerving.

I never knew there was a museum close by which housed dinosaurs. So, when I found out the other week that Leicester had such a museum then I had to go. This led to me driving through frosty, foggy and icy conditions to Leicester – a city which isn’t far from me but isn’t somewhere I’ve driven to before. I’m stupidly committed to visiting dinosaurs. I roped in Gareth and my good friend/future housemate Alice who is from Leicestershire. We parked up, braved the stupidly cold weather and walked through Leicester to reach the New Walk Museum and Art Gallery.

New Walk Museum is quite an impressive building on the outside. It is rather ornate and the street which it is on is surprisingly pretty. Inside, it is pretty similar. Lots of galleries of fancy paintings which, I’m not going to lie, go a little bit over my head. We traipsed around some of these galleries trying to find the dinosaurs because we made the mistake of going upstairs first. It is somewhere that my school would have taken me (I’m surprised that they didn’t) and ironically there were some gatherings of annoyingly loud school trips visiting that day. We headed back down the stairs, turned the corner and there they were. The dinosaurs.

The first thing that astounds you is the Cetiosaurus a.k.a. George – The Rutland Dinosaur. For a sauropod, it is relatively small but as you stand beneath it you feel like the tiny one. The one thing I never realised about Cetiosaurus is that it is from Rutland. That’s like an hour away from where I live. Honestly, it’s amazing. It is the most complete sauropod fossil ever found in the UK (and one of the most complete in the world) and it is practically on my doorstep. Incredible. 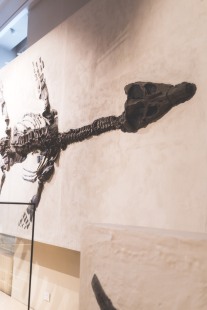 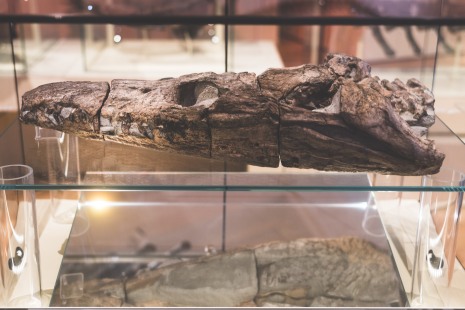 Furthermore, there’s the Neovenator from the Isle of Wight, a Coelophysis from America, a Deinonychus skull and a Plateosaurus. It is quite an impressive collection of dinosaurs for a relatively small museum that doesn’t specialise in Natural History. As well as these there were countless specimens of marine reptiles including the “Barrow Kipper” – a plesiosaur discovered in Barrow-upon-Soar (which is about half an hour away from me). There was even part of an ichthyosaur from Nottingham! Can you tell that I’m super excited about the local fossils? The museum also houses the Charnia fossil – the first fossil that came from Precambrian rocks which was discovered in Charnwood Forest in Leicestershire. It’s all super exciting.

The rest of the museum wasn’t really of interest to me. Art galleries are not something I’m overly interested in and the section on the story of life was in serious need of an upgrade. But let’s be honest, I went to see the dinosaurs – not the rest of the museum.

My one pet peeve is the lack of natural light in the space. As a photographer, I’m a huge stickler for natural light and most museums shut all the blinds and put a load of yellow artificial light on which really bugs me. New Walk was exactly the same with this. But it’s just a bug bear of mine and doesn’t really impact the amazingness of the dinosaurs.

Overall, it is a nice little space for dinosaurs. Would I visit again? Probably. It isn’t that far away from me at all and it houses some pretty important, amazing fossils. I want to first explore some other museums but I’m super happy I visited. I also picked up some cool vintage books from the gift shop and a bamboo travel mug which had some T-Rex and ammonites on. Plus, I had an awesome day out with some awesome people looking at dinosaurs. What’s there not to love?

New Walk Museum and Art Gallery: 7 out of 10 Goldblums.

Emma a.k.a. The Cookieraptor x